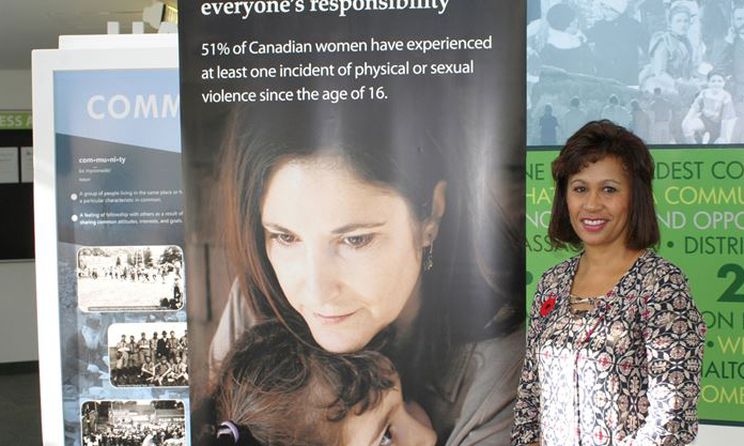 United States election campaigns were definitely in the minds of local officials as they marked November as Woman Abuse Awareness Month in a ceremony at the Halton Regional Centre Thursday (Nov. 10).

“I am personally heartbroken and fearful,” said Vieira-Martin before an audience of Halton police, Regional employees, representatives from Halton Women’s Place and others.

“I am shaken that 59 million of our southern neighbours disregard these statements as critical in determining fitness to lead. I am equally distressed when I hear the rationalization that this is ‘locker room talk.”

Vieira-Martin condemned any scenario in which an adult male feels that a way to impress his friends is through bragging about committing violence against women and noted an imbalance of power is often associated with violence.

Oakville Mayor Rob Burton said, “All the men I know, and most men, I believe were appalled by those remarks,” he said.

“A real man does not tolerate those kinds of comments in his presence. He pushes back and puts them down and says that it is not manly to talk that way.”

Burton said Halton police and the Halton Region would be working over the next year to create a Community Safety and Well-being Plan, which would see the community and Halton police collaborate to combat domestic violence and violence against women.

During her presentation Vieira-Martin emphasized the problem is widespread.

She noted the issue of violence against women continues to be one that lives in the shadows often dismissed as an issue of the past or something that happens elsewhere.

The truth, said Vieira-Martin, is that every statistic and marker indicates women in Canada and Halton continue to routinely and regularly be at risk of abuse and violence.

“Every four days in Canada a woman is killed by a family member. Seven in 10 cases of reported family violence involve women and girls and only three in 10 victims tell us that the police are aware that their spouse is violent,” said Vieira-Martin.

Vieira-Martin emphasized violence against women is not a women’s issue, but a people issue.

She said raising awareness of the issue and attitudes and values that allow it is a step towards eliminating it.

“This is unacceptable to us,” he said.

“We, as a team, are quite committed to stopping this.”

He noted the Halton police Domestic Violence Unit, Child Abuse and Sexual Assault Bureau and Victims Services Unit are dedicated to helping abuse victims and making it easier for them to come forward.

Duraiappah said he is disturbed by the statistic that more than 50 per cent of Canadian women have experienced at least one incident of violence or sexual assault since the age of 16.

While much of the focus in the past has been on how to keep women safe, he said, equally important is talking to young men and challenging stereotypes and negative views of women.

“In 2013 Halton Regional Council unanimously in a recorded vote passed a motion to make Halton a zero tolerance region with respect to violence against women and children,” said Carr.

“We continue to stand by that important resolution that this injustice under any circumstances has no place in our community.”

Carr said the Region partners with Halton Women’s Place and 20 other community groups dedicated to addressing the root cause of violence in this community.