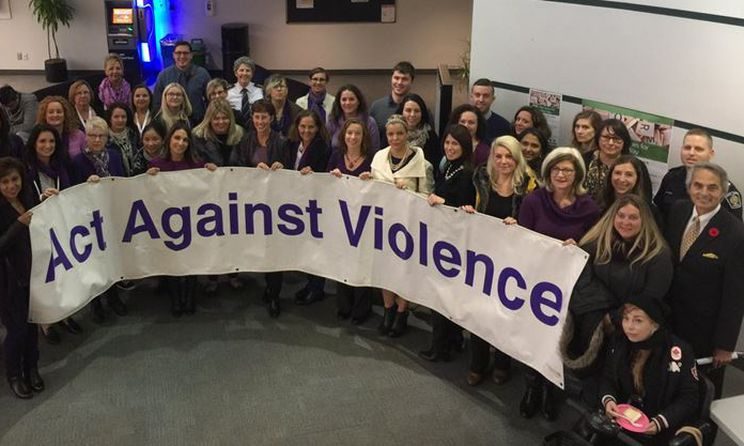 If there is to be any progress in combating violence against women, then men will need to step up and be part of the solution.

This theme was repeated over and over again, as local officials marked November as Woman Abuse Prevention Month during a ceremony at the Halton Regional Centre on Thursday (Nov. 2).

Halton Violence Prevention Council (HVPC) chair Chondrena Vieira-Martin began her presentation by calling violence against women not a women’s issue, but instead a human rights issue, which all must work to combat.

“It is not appropriate nor sufficient in placing the sole responsibility for keeping women and children safe on only half the population,” she said before an audience of Halton police, regional employees, representatives from Halton Women’s Place (HWP) and others.

“We need to engage men to become accountable for their (gender’s) role in the abuse of women and to assist them in changing any behaviour, attitudes and beliefs that form part of this abuse cycle.”

Vieira-Martin noted that by providing services across the family spectrum, she believes the direction violence is taking in the community could be changed.

She noted Thrive Counselling Services Halton offers a Partners Abuse Response program for people who have used abusive behaviours with their partners.

The registered charity also features the Caring Dads program for fathers who have been abusive to their children or children’s mother.

There is no shortage of reasons for these programs, with statistics presented during the ceremony noting every six days, a woman in Canada is killed by her intimate partner.

Another chilling statistic asserted that there are 460,000 sexual assaults in Canada every year.

Those present also heard from Chris Ventura, who spoke on behalf of Oakville North Burlington MP Pam Damoff, who was in Ottawa on Thursday.

He noted that one in four women would face gender-based violence in their lifetime, and that rapid changes in technology allow perpetrators to direct violence through increasingly diverse and pervasive channels.

Ventura also talked about the Status of Women’s Committee report, which Damoff tabled to study violence against young women and girls in Canada.

“The committee decided to conduct this study because acts of gender-based violence can prevent young women and girls from leading fulfilling lives as equal members of Canadian society,” he said.

“Survivors of gender-based violence are often made to feel responsible for the violence committed against them, and responses from the judicial system, colleges and universities, and other institutions can often serve to re-traumatize survivors who seek regress.”

Ventura said the committee made 45 recommendations to the Government of Canada aimed at preventing, responding to and eliminating acts of violence against women and girls.

One key point made in the report, he said, is the absolute necessity of engaging men and boys in addressing violence.

The numerous sexual assault allegations facing Hollywood mogul Harvey Weinstein and the #METOO campaign were not far from the minds of many of those present.

Oakville Ward 1 Coun. Sean O’Meara said the #METOO campaign, which saw women around the world take to social media to discuss their own experiences with sexual assault and harassment, put a human face to the issue.

He also pointed out men have moments every day where they can work to counter these cultural issues.

Halton police Deputy Chief Carol Crowe said every woman has the right to live in safety and to feel secure in her home, at her workplace and in her community, free from the threat of violence.

“While much has been done to address the issue, we clearly have a long way to go, and the multitude of stories emerging in the media involving high-profile men only highlights the need for us to join together to do all we can to prevent violence against women,” said Crowe.

“As a police service, our approach can be somewhat reactive in nature. When there is a crisis, we respond. However, today is about prevention. What can we do to prevent women from suffering abuse and how can we help end the cycle of violence?”

Crowe noted the Halton police have a Victims Services Unit dedicated to ensuring all victims of crime receive the support they need.

Halton police also have a Victim Quick Response Program, which provides financial support to women who suffer from violence.

Crowe said these funds could be used to repair broken windows or doors, provide counselling to survivors and their children and provide safe places to stay when required.

Halton police also have a dedicated Domestic Violence Unit, which not only responds to incidents of domestic violence, but also reviews cases where no criminal offence has been alleged to determine if there is a threat of violence.

Police have also given mobile tracking systems to women who are at elevated risk of victimization.

“These devices are issued at no cost to the individual and provide her with the peace of mind that should they find themselves in trouble, police will respond to their location without delay,” said Crowe.

The program is offered to men who are at risk of or are engaged in violence against women.

McGrath noted in some cases the attendees were not even aware what they were doing constituted abuse.

“We’ve had men who punch things in other rooms, then they get referred to the program and come here, and realize those actions were intimidation and the effect that has on their partner is actually abuse,” said McGrath.